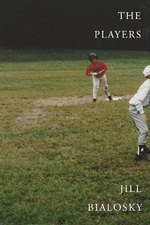 Jill Bialosky will read on November 8th from her latest poetry collection The Players (Knopf, 2015). From the physical world of the baseball diamond to the emotional center field of caring for an aging mother and a maturing son, Bialosky handles both the joys of mothering and the inevitability of loss with consummate grace.

Bialosky has been published in The New Yorker, The American Poetry Review, The Nation, the Paris Review, and The New Republic, among others, and she has received a number of honors, including the Elliot Coleman Award for Poetry.

A native of Cleveland, Ohio, Bialosky has made her home in New York City since completing her advanced writing degrees at Johns Hopkins and the University of Iowa’s Writers Workshop. She is the author of four poetry collections, three novels including The Prize (Counterpoint, Sept. 2015), and a best-selling memoir History of a Suicide (Atria Books, 2011). She is currently an Executive Editor at W. W. Norton & Company.

“[The Players] is a heartfelt ode to the American suburbs and countryside [exploring] the complexities of interpersonal, particularly familial, relationships. . . Bialosky isn’t afraid to acknowledge life’s transience or its beauty, and she excels at both.” —Publishers Weekly

“Bialosky writes poignantly of the seashore, of life sweeping in and rushing out as a woman cares for her increasingly frail, forgetful mother while watching her son shed childhood. A sun-spangled and deep-shadowed collection in which the archetypal is laced tightly into precious, ordinary life.” —Booklist