Franny Choi is the author of several books, including The World Keeps Ending, and the World Goes On (Ecco Books 2022), Soft Science (Alice James Books, 2019), Floating, Brilliant, Gone (Write Bloody Publishing, 2014), and a chapbook, Death by Sex Machine (Sibling Rivalry Press, 2017). She was a 2019 Ruth Lilly and Dorothy Sargent Rosenberg Fellow and has received awards from the Rhode Island State Council on the Arts and Princeton University’s Lewis Center. Her poems have appeared in the New York Times, the Nation, the Atlantic, Paris Review, and elsewhere. She is currently an Arthur Levitt, Jr. Artist-in-Residence at Williams College. More Info >>

Matthew Olzmann is the author of three collections of poems from Alice James Books: Mezzanines, which was selected for the Kundiman Prize, Contradictions in the Design, and Constellation Route.  His writing has appeared in Best American Poetry, Kenyon Review, New England Review, Brevity and elsewhere. He’s been awarded fellowships from the Kresge Arts Foundation, the Bread Loaf Writers’ Conference and the MacDowell Colony. Currently, he teaches at Dartmouth College and in the MFA Program for Writers at Warren Wilson College. More Info >> 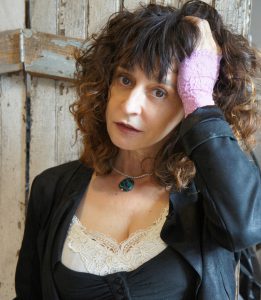 Kim Addonizio is the author of seven poetry collections, two novels, two story collections, and two books on writing poetry: The Poet’s Companion (with Dorianne Laux) and Ordinary Genius. Her poetry collection Tell Me was a finalist for the National Book Award. She also has two word/music CDS: Swearing, Smoking, Drinking, & Kissing (with Susan Browne) and My Black Angel, the companion to My Black Angel: Blues Poems and Portraits, a collaboration with woodcut artist Charles D. Jones. Her poetry has been translated into several languages including Spanish, Arabic, Italian, and Hungarian. Collections have been published in China, Spain, Mexico, Lebanon, and the UK. Addonizio’s awards include two fellowships from the NEA, a Guggenheim, two Pushcart Prizes, and other honors. Her latest books are a poetry collection, Mortal Trash (W.W. Norton), and a memoir, Bukowski in a Sundress: Confessions from a Writing Life (Penguin). Now We’re Getting Somewhere, was published by W.W. Norton (March 2021). More Info>>

Henri Cole was born in Fukuoka, Japan and raised in Virginia.  He has published ten collections of poetry and received many awards for his work, including the Jackson Poetry Prize, the Kingsley Tufts Award, the Rome Prize, the Berlin Prize, the Ambassador Book Award, the Lenore Marshall Award, and the Medal in Poetry from the American Academy of Arts and Letters. His most recent book is Orphic Paris, a memoir, published by New York Review Books. From 2010 to 2014, he was poetry editor of The New Republic. He teaches at Claremont McKenna College and lives in Boston. More Info >>

The Katonah Poetry Series is pleased to award the 2022 Billy Collins Poetry and Creative Writing Scholarship to Seneca Schwartz. This annual scholarship goes to a student who is passionate about poetry and/or creative writing and has demonstrated outstanding accomplishment in the literary arts. Applicants submitted 5 pages of original work in order to be considered for this award.

Seneca Schwartz is a soon-to-be college freshman who plans on studying film production at Emerson College. She is passionate about giving underrepresented people a voice through film and has made two short documentaries about women empowerment, and the importance of female role models. She is interested in strengthening her creative writing skills to become a more well-rounded artist.