KPS welcomes “this master of the trickster elements within language”

KPS welcomes Irish poet Paul Muldoon, winner of the 2002 Pulitzer Prize for Moy Sand and Gravel, (which also won the International Griffin Poetry Prize) and poetry editor for the New Yorker magazine since 2007. Muldoon will read from “One Thousand Things Worth Knowing” (Farrar, Straus and Giroux, 2015), as well as selected works from a lifetime of poetic achievement.

Muldoon published his first poetry collection, New Weather (Faber, 1973), when he was just 21. All told, more than thirty books of poetry have been published under his name. As librettist, translator and editor, he has published sixteen more.  Muldoon has also authored children’s books, drama for both radio and television, song lyrics and critical works. His work is known internationally through many translations—the languages total twenty—and he himself has been called “the most significant English-language poet born since the second World War” (The Times Literary Supplement).

Born in 1951 in Northern Ireland, Paul Muldoon attended Queen’s University, Belfast, where he studied with Seamus Heaney and became associated with a group of noted Northern Irish poets including Heaney, Michael Longley and Derek Mahon.  Following college, he stayed on in Belfast, working as a producer for the BBC. His early collections brought him steadily mounting critical acclaim and assured status as a major poet. As Professor of Poetry at Oxford University, he produced a series of lectures that have been published as The End of The Poem, which the London Review of Books called “one of the most thrilling books of ‘literary criticism’ published in the last fifty years.” Since 1987 he has lived primarily in the U. S., with his wife and two children. He is Howard G. B. Clark Professor of the Humanities at Princeton University.

Praise for “One Thousand Things Worth Knowing” 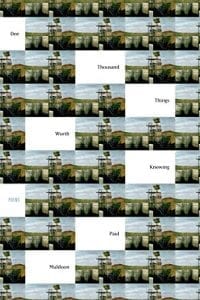