KPS-admin Posted on January 26, 2017 Posted in Past Events

On Sunday, November 5, the Katonah Poetry Series will complete its 50th anniversary celebration with a reading by noted Canadian poet Carla Funk. Funk was born and raised in Vanderhoof, British Columbia, one of the earliest Mennonite settlements in the province. She now lives in Victoria, where she served as the city’s inaugural poet laureate from 2006 to 2008.

In her poetry, “Funk works between polarities as she sifts through nature, the sacred, the rural, and the past while giving way to the urgings of the profane, the urban, and the present.” (Gillian Sze, Rhubarb) She has published five books of poetry including Gloryland (Turnstone Press, 2016), Apologetic (Turnstone, 2010), and The Sewing Room (Turnstone, 2006). Her work has appeared in seven anthologies, including Hammer & Tongs: A Smoking Lung Anthology (Smoking Lung Press, 1999) and Breathing Fire: Canada’s New Poets (Harbour Publishing, 1995).

Carla Funk completed a BFA in Writing and English and an MA in English Literature at the University of Victoria, where she taught for more than fifteen years. She currently runs independent writing workshops and retreats. In 2012, she won the Constance Rooke Creative Nonfiction Award and she is currently polishing a creative nonfiction collection about small-town childhood and spiritual imagination. “ 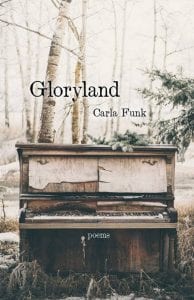 “Memory, childhood, family, language, faith, imagination and the natural world are the kingdoms she happily plunders in her writing.” (The Scores, Autumn 2016).

“Better than anyone, Carla Funk finds words for the rural, the north, the troubled family, and for ‘that feeling when the world goes wrong and true.’ Reading this book makes me shiver with delight. This is a writer who’s been baptized with the dark waters of poetry. ” (Lorna Crozier, on Gloryland)

Doors of the Katonah Village Library Garden Room open at 3:30 pm. The reading will be followed by audience Q&A, a festive reception, and book signing with the poet.

For Email Marketing you can trust