“Poetry allows me to explore and express my authentic self—whether the poem concerns childhood or social change or a poisonous plant.” —Kimiko Hahn

“In Brain Fever Kimiko Hahn… touches concrete ground in the realm of neuroscience, and in the world outside the mind, where love, betrayal, regret, and debilitating loss reside. This is a beautiful and troubling book, a marriage of what matters most: the mysteries buried at our very core and the world that cradles and cuts into us at every turn.” 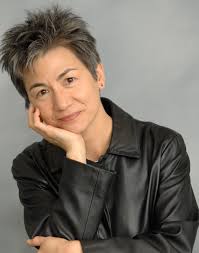 Kimiko Hahn has authored nine books of poems, including: Brain Fever (W.W. Norton, 2014) and Toxic Flora (2010), which both take their cues from science. Her numerous awards include a Guggenheim Fellowship, the PEN/Voelcker Award, the Shelley Memorial Prize from the Poetry Society of America, and a Lila Wallace-Reader’s Digest Writers’ Award, as well as fellowships from the NEA.  She has taught at New York University, and is a distinguished professor in the MFA Program in Creative Writing & Literary Translation at Queens College, The City University of New York. Kimiko Hahn was born in Mt. Kisco, grew up in Pleasantville and currently resides in NYC. She is currently President of the Poetry Society of America.

Kimiko Hahn was born in Mt. Kisco, New York, the child of artists, a Japanese American mother from Hawaii and a German American father from Wisconsin. She received an undergraduate degree in English and East Asian studies from the University of Iowa, and a master’s degree in Japanese Literature from Columbia University in 1984. Hahn is a Distinguished Professor in the MFA Program in Creative Writing and Literary Translation at Queens College, CUNY, and currently serves as President of the Poetry Society of America.