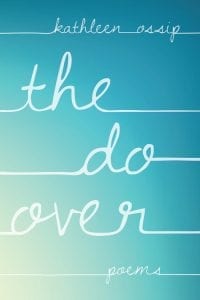 Kathleen Ossip has authored three volumes of poetry, a chapbook of poems on movies (Cinephrastics) and The Status Seekers, a verse play. Her debut collection, The Search Engine (Copper Canyon, 2002) was chosen by Derek Walcott to receive the American Poetry Review/Honickman First Book Prize. The Cold War (Sarabande Books, 2011) received a starred review from Publishers Weekly and appeared on their 5 Best Books of 2011 list as well as the American Academy of Poets list of Notable Books of 2011. Ossip’s most recent collection, The Do-Over (Sarabande, 2015), was a New York Times Editors’ Choice.

Ossip’s poems have appeared in The Best American Poetry, Paris Review, American Poetry Review, Boston Review, The Washington Post, The Believer, A Public Space, and Poetry Review (London).  Ossip is the editor of the poetry review website SCOUT and has also served as poetry editor for Women’s Studies Quarterly and LIT. She has received a fellowship from the New York Foundation for the Arts and grants from Yaddo, Ragdale, and the Bread Loaf Writers’ Conference. Most recently, she has been awarded a Radcliffe Fellowship for 2016-2017.

Born and raised in the Albany area, Kathleen Ossip holds an MFA in creative writing/poetry from The New School, where she currently serves on the faculty. She is a 20-year resident of Hastings-on-Hudson, and has frequently taught at the Hudson Valley Writers’ Center in Sleepy Hollow.